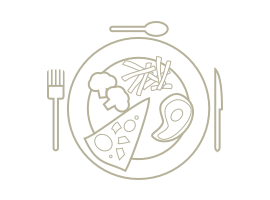 Aware that they could contribute to prevent unbalanced diets and bad eating habits, the advertising industry decided to promote well-balanced diets and healthy physical activities, especially in adverts aimed at youngsters.

In this vein, each advert in its content must not contradict the efforts for the improvement of French eating habits.

Therefore, when an advert mentions or represents a food behavior, it must not encourage behaviors contrary to the recommendations widely admitted and expressed by the French National Nutrition and Health Program. (PNNS)

The notion of product, used below, refers to food as well as to drinks.

In addition to specific existing legal rules, these adverts, no matter the form, have to respect the following rules:

a) When the meal as a whole, lunch or dinner, is visualized, it must be a well-balanced diet.

The representation of a well-balanced diet has to be respected in all circumstances when breakfast and snack time are presented.

b) If the French PNNS recommendations are mentioned in an advert, they have to be positively introduced and not denigrated.

c) Likewise, adverts must not contradict, nor ridicule good food behaviors or healthy lifestyles, nor minimize their interest.

a) Adverts shouldn’t encourage an excessive consumption of products.

The notion of “excessive quantity” is analyzed in comparison with the audience which is concerned, and in function of the context which is represented.

Encourage excessive consumption means, for example, representing a person consuming or about to consume a product without any restraint or in unreasonable quantities.

b) All the more, claims encouraging directly excessive consumption such as “to be eaten without restraint” are banned.

c) The physical exercise cannot be used as an excuse for presenting excessive consumption.

d) The expression of satisfaction and pleasure triggered by the consumption of the product is not concerned.

a) It is possible to show someone eating between meals, nevertheless adverts shouldn’t encourage eating all day in an unreasonable way.

b) Nibbling shouldn’t be presented as substitutable to a meal.

All consumption situations in front of a screen, in a house, are prohibited, even if they feature fiction characters, real or imaginary.

a) Equivalences between food products are only allowed for products belonging to the same food category.

b) Adverts shouldn’t encourage substitutions between categories, notably by suggesting that the profits of the two products compared are globally equivalent.

c) These equivalences should be nutritionally relevant (for example, they must concern nutrients present in both products and in significant quantities).

Adverts must avoid representing behaviors contrary to ethical rules related to sustainable development  by encouraging in any way food wasting. Food wasting covers throwing, as if it were waste, a non trivial amount of food that is still edible.

Adverts must avoid any stigmatization of persons because of their size, their stoutness or their thinness.

When adverts presenting an eating behavior also show physical activities or sports, they must not spread messages contrary to sport values (as for example, violence, incivility, discrimination…)

2.1 Association of performance to humor or to an imaginary world

a) Children shouldn’t be led to think that food can change their daily life (art activities, school, and sport) by exceptional performances.

The use, in an advert, of humor, original and unusual situations, or the reference to an imaginary world, is possible if it stays in a fantasy world and doesn’t risk to be understood by children like real achievements which could result from the food consumption.

b) An advert using imaginary characters well-known in children broadcasted fictions and encouraging children to consume a product, should not promote behaviors which are opposite to healthy eating behaviors and lifestyles.

2.2 In reference to adults

Adverts shouldn’t depreciate or minimize the authority or the advices of the adults surrounding the children in product consumption, neither suggest their resignation.